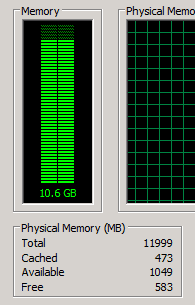 Diagnosing the apparent problem further with a tool like RAMMap from Sysinternals, shows a huge chunk of memory being "used" as Driver Locked. 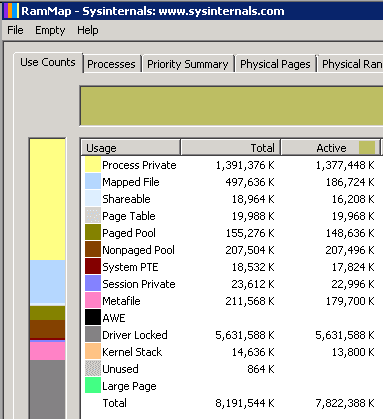 What is driver locked memory, and is this a problem?
Driver locked memory is when a kernel-mode driver prevents memory pages from being swapped to the page file.  It is through this mechanism that Hyper-V varies the amount of available memory to a guest when Dynamic Memory is enabled. In the case above, the Hyper-V Manager may show the guest only using about 50% of its maximum allocated memory with the remaining 50% being "locked" by the Hyper-V integration services drivers. VMware uses the same process though its balloon driver to reclaim guest memory.
For most applications, this locked memory is not going to cause a problem as Hyper-V will release memory as the amount of available memory lowers (the buffer threshold can be set on the guest properties).  However, some applications, like Microsoft SQL Server, will try to manage their own memory usage based on the available memory.  In that case, Dynamic Memory could be a problem.
To disable Dynamic Memory and release the driver locked memory in Hyper-V, you will need to shutdown the guest and uncheck Dynamic Memory from the guest memory properties.  Then set the Start-Up memory to the previous maximum memory value.

I am an Operations Engineer and System Administrator supporting a SaaS environment. I have about 15 years of experience working in the Windows stack with a good sprinkling of networking and telecom work thrown in. In a previous life, I wrote the open source software Liberum Help Desk.